Secondary Survivor
By Bernadette A Moyer 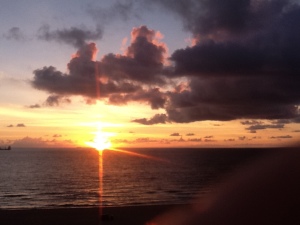 Sexual abuse has many victims, the obvious victim of the abuse and all those who suffer from the fall out. There is a tremendous amount of fall out associated with sexual abuse.

I am not a victim of sexual abuse and yet it has impacted my life in a significant way. There was a time I stood up for a child who claimed they were sexually abused. I took a stand against the person who they claimed abused them. Little did I know at that time the cost of my decision. I did not ask for sexual abuse to impact my life nor did I ever welcome it. Decades later I have learned more about this subject that I care to admit.

The term, “secondary survivors” is a term that I found in my research and attributed to all those people that surround the victim. The people who were not directly abused but whose lives were impacted by all the fall out related to the abuse.

Because the abuser had married into our family and because he had married my mother I would eventually lose my mother and my four sisters who followed our mothers lead of estrangement. When I was told of the abuse, I confronted the abuser and my mother. There was only one face to face confrontation and little did I know at that moment in time that I would be deleted from the family. They basically killed the messenger.

The “killing” would take place in many forms from denial to abandonment to discrediting; by speaking out I became a huge target. It was easier for all involved to make me look bad rather than to take a good hard look at the person who was being accused of the abuse.

In order for my mother and my sisters to believe the truth, and to believe me, they would have had to change their life and they weren’t going to do that.

Years later I had a social worker state, “It must have been really hard for you to give up your family?” without thought my answer was “What choice did I have?” The child who made these claims was not taken seriously by any other person in my family but me. In the company of the extended family they took the victim into the abusers company. They were notified of the allegations and did nothing about it. Not only didn’t they protect the child who claimed abuse, but they brought their own infant babies around the person accused of sexual abuse.

From the moment this came into my life I tried to educate myself by reading up on it, talking with professionals and working in an environment where abused children were believed, helped, supported and healed.

Again, in 2011, I met with all kinds of professionals on this subject. My experience happened in the late 1980’s today our society is very clear on how these matters should be handled. I met with private detectives, social workers and with child advocates. I also became friendly with several professional mental health care providers who specialize in sexual abuse cases.

One child advocate made a statement that will stay with me forever. She said, “This is not how a loving family would have handled this. They would have said, “We love you, we love this child, we want to get to the bottom of this because we don’t want to lose you and this child to ever feel uncomfortable. Why are they saying this, what happened and what can we do to remain a family?”

These statements were never made. The advocate also stated, “What your family did is how guilty individuals react, I have seen it over and over again. What guilty individuals/child molesters do is try to turn as many people against the accuser, including the victim. It happens every single time.” She was 100 percent correct.

Hopefully the sharing of my experience will help to educate. It isn’t just the victim that will need help and support but all those around the victim. The ripple effect can and does destroy families.

Now more than 25 years later I can see how my actions immediately following made me an easy target. One PhD. stated, “You made it easy for them by walking away.” He also gave me articles from JAMA, the Journal of American Medical Association. In those articles I read about the divide between social workers/mental health care providers and the legal professionals.

The prosecutors want to prosecute these crimes and the mental health care professionals have concerns about the trauma associated with the process. What if that abused child has to relive their trauma, tell their personal painful experience and what if they aren’t believed? Many mental health care professionals believe this could be even more devastating than the abuse itself.

One of the things that many parents and adult caregivers instinctively do when the child communicates abuse is to respond with a big reaction. This often sets the tone for easy manipulation and a child that grows up and has learned not only how to get a big reaction but how to manipulate people. This can further a continued victimization mentality.

I have learned so much and there is no perfect way to handle this, just about every day you can hear or read in the news about new cases of sexual abuse. But in reality a large majority of cases are NEVER reported. The shame, the embarrassment and the reliving of the trauma cause many victims to hold onto the abuse and to hold it inside. It doesn’t go away though, it becomes part of the life of the abused acknowledged or denied.

When I made my decisions as to how to handle the knowledge of the abuse, I never dreamt of all the fall out and of the years of anger and hatred. I have people in my family that delete other people in my family just for talking to me. My crime, I spoke out on the behalf of a child victim. Today I would caution anyone taking a stand. GET a STRONG SUPPORT TEAM of PROFESSIOALS WHO ARE WELL VERSED and EXPERIENCED in CHILD SEXUAL ABUSE. You absolutely can’t go it alone nor can you conceal what has happened.

By trying to protect my mother from embarrassment and a child from further humiliation all I really did was allow an accused sexual abuser off the hook. Even he deserved to have his day in court to determine the validity of the accusations. No one wins in trying to “protect” anyone from allegations of sexual abuse.

After my mother died and I was omitted from her obituary a friend of over 40 years sought me out. We were camp counselors together and my mother was the camp nurse. My friend knew my family and couldn’t understand why I was not included in my mother obituary. Sadly when we reconnected we learned we had even more in common than being teen camp counselors together. Her life was also significantly impacted by sexual abuse too. And the abuse was by a family member. The difference was that in her family it was believed and the family was loving and supportive toward the victim.