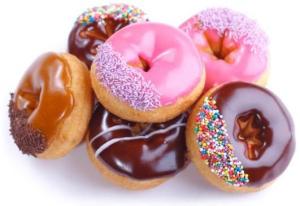 Sometimes it is spelled “faschnacht” it is the English name for a fried donut and observed on Shrove Tuesday, the day before the Lenten season begins. Having grown up in the Northeast of Pennsylvania I was aware of and often celebrated Fasnacht day with a donut. Well, actually, probably, maybe more than just one!

In parts of Maryland the treats are called Kinklings and sold in bakeries on Shrove Tuesday. The word Fasnacht is German meaning Fast (verb to fasten, fast) and Nacht meaning night, eve, and the eve of Lent.

Shrove Tuesday is also known as Fat Tuesday, this is said to have come about in preparation of fasting during Lent and giving up rich and fat foods such as eggs, milk, meat and rich buttery dishes. Families were encouraged to eat up the rich foods in their pantries. In England they call Shrove Tuesday, Pancake Day.

Ash Wednesday is the beginning of the most Holy Christian holidays following Strove Tuesday and a time when many choose fasting and repentance for the 40 days leading up to Easter Sunday.

As a kid, I just knew it to be “donut day” as an adult I love the little bit of history that came about during this period just before Lent and just how it was celebrated. You don’t have to be a Christian to enjoy pancakes or donuts; sometimes it is fun just to say the word “Fasnacht” and to understand what it means.

In case anyone is looking for me, I’ll be picking mine up at Brown’s Market in Loganville, PA, they are the best! This should hold me over and through the Lenten season this year, when I plan to indulge far less. I can already anticipate the experience in getting my bag, they offer plain, glazed and powdered and they are larger than most donuts, they are fried and you can taste it but they aren’t greasy and they are just so soft and fresh.

The smell at Brown’s is intoxicating and that first bit is well worth the trip. There is a separate stand at the market just for donuts on Fasnacht day and many have called ahead with their order. It is just fun to be a part of it and to celebrate Fat Tuesday. Who doesn’t love a really good donut?

So on Tuesday February 28, 2017 support your local bakery and enjoy a fresh donut.