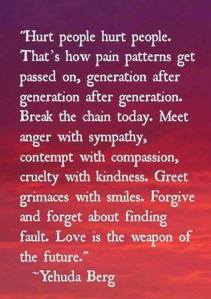 When James was just nine years old, he witnessed his father shoot and kill his mother and then his father shot and killed himself. James witnessed it all and he has every right to his anger. He has been in and out of mental health care facilities and schools for children with emotional challenges. For days and weeks James seems to be doing well and then an anger episode that generally lands him back in a medical care facility.

Most of the professionals that treat James believe he has a 50-50 chance, he can go either way. He will either end up in prison having hurt someone or he will end up down on his knees and God will use him in a bigger and better way that he could ever have imagined for himself. James is hurt and he is bitterly angry. The loss of both of his parents by his father’s act of violence has sent him into the unknown; he was an above average student and now is completely lost. This is trauma at its worst and a lot for a young boy to carry with him.

He has a professional team that supports him along with his maternal grandmother who absolutely loves and adores him. This is a true story, however, the name has been changed.

Many of us walk around with far less hurts than James, yet there is hope for James and for anyone else who has been hurt. The deciding factor, will James find it within himself to take his anger and hurt and turn it around and do something good with it? What road will he travel? Will it be bright sunny skies or more darkness and despair? In the end, only James can make the choice on what road he will travel down.

Every single one of us can claim to be “hurt” over things that happen to us in our lifetime, the question is “what are we willing to do about it?” Obviously James didn’t ask for the hand that was dealt to him and yes it is so unfair, but like the bell that can’t become unsung, James has to take it hurt and learn from it. He has to use it to gain a deeper understanding that hurt people, hurt people. Clearly there is no excuse for the killings by his father; James will no doubt have a lot to overcome.

For every hurt in our life we are afforded an opportunity, we can do something good because of it or we can use it to justify our own poor choices. I don’t know James’s father story but I can’t begin to imagine why an adult would kill the mother of their child and then themselves in front of that very child.

Life can be cruel but it can also be joyous. Bad things do happen to good people. My hope for James would be that he finds an outlet to express his anger and that it eventually leads him to help others. That James can rise above his family circumstances and know that God loves him and wants so much more for him.