A Restored Trust
By Bernadette A. Moyer 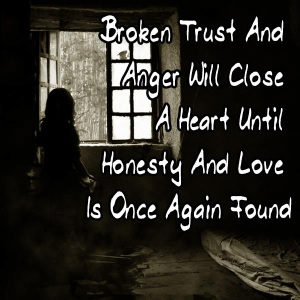 Earlier today I wrote an essay about Broken Trust and how important trust is to every relationship. After writing it I was reminded of a “broken trust” that was restored. It was with our son.

A few years ago over July 4th holiday when my husband and I went to the beach our son was scheduled to work so he remained home. At that time he was 19 years old. We never had any real trust issues with him, he is an Eagle Scout and we often tease him. We tease him about his honesty; let’s just say you wouldn’t want to rob a bank with him. Because in a second he would give both himself and you right up!

That holiday he invited a few guys over to swim in our pool he is a lifeguard and we have no issue with this. The problem was that a few friends turned into about 60 people and it was obvious by all the empty beer cans and empty booze bottles in and around our home that underage drinking had taken place. Not to mention the cigarette butts and huge fat cigar remnants.

He thought he had cleaned the place up but he missed many things and the youngest coolest neighbor came by to tell us just how loud the music was and how many people were here. He was busted!

Father and son had words, I was disappointed and at that time our son wasn’t sorry but rather defiant and we all agreed it best if he went to stay with a friend until things cooled off a bit. My husband’s very expensive watch was missing and probably stolen. The kids that came, many were not his friends. There were so many people in and around the house that by our son’s own admission “It was out of control.”

I did something similar when I was a kid and I wanted to use this as a teaching opportunity, my husband never did such a thing and saw it as a huge disrespect and that trust was broken. Within a month our son returned home. He was really sorry and made amends. Even though he couldn’t afford to replace the expensive watch that was gone, he did buy his father another watch.

He vowed it would never happen again and we impressed upon him all the issues with allowing underage drinking to take place on our property and in our home. How bad this could have been.

It is really easy to forgive someone when they are sorry and when they try and make it right. The take away for me is and remains, that the love and respect we have for our son and that he has for us far outweighed this lapse in judgment. He was a kid and doing what many kids do, today he has learned something and we are all closer than ever before.

Even though we felt hurt and disappointed and somewhat disrespected, he didn’t have a pool party to try and hurt us. Things happen in all relationships but it is what we do with what happens that determines whether we move ahead together or not.

Forgiveness is always possible but first we have to accept our role and if we are in the wrong, be sorry and try and make it right.

Today more than four years later, our son now 23 appreciates everything. Just about every card he gives us for birthdays and other holidays he talks about maturing into being an adult and how much he loves us and sees things so differently from when he was a child.

Trust in relationships can be tested and what we do during that “test” often determines in what direction the future of the relationship will take. Thank goodness we all grew and learned and that the love in our family was far greater than a temporary lapse of good judgement and a broken trust.

A broken trust doesn’t have to be the end of a relationship; it can be the beginning of a greater understanding and appreciation.

Bernadette on Facebook at http://www.facebook.com/bernadetteamoyer
New book! Along The Way available at Amazon and Barnes & Noble