Memorial Day beyond Hotdogs and Burgers, Our Great Men and Women Who Serve 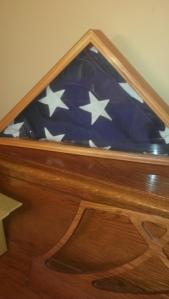 Today for most of us Memorial Day is the start of summer with the opening of community pools, picnics and outdoor gatherings. We celebrate it by grilling our hotdogs, hamburgers, chicken and barbecue on the grill. Many take advantage of the Memorial Day weekend sales at the mall, car dealerships, big box stores and grocery stores. For many American’s it is a three day weekend.  Beach communities see it as the beginning of the summer season.

Memorial Day started as a holiday to remember the Civil War. It was a time in our history when our country that was at war with itself. It has been said to have been the bloodiest and most deadly war on United States soil.

We have expanded our definition of Memorial Day to include all military service men and women. Many of us reflect and think about all those who served and returned home, those who were injured in service and those who lost their life defending our country.

My husband Brian and I both have fathers who served during the Korean War. His father John and my father Bernie never met but they both returned from service honored with a purple heart. My dad was injured and medicated for the rest of his life as a result of a head injury he received while in Korea.

As a teenager I wore a P.O.W. bracelet, Prisoner of War and it was during this time that the Vietnam War was going on. In my early twenties I married Randy Moyer who was a two-term Vietnam veteran. Randy was in the Navy and honorably discharged after 6 years of service with a purple heart. He was blown off a ship and as a result he became an epileptic. In order for him to be fully functioning he had to be medicated every single day of his life. There was never a night’s sleep where he wasn’t shaking in our bed. He suffered from post-traumatic syndrome.

I will never forget when I was 8 months pregnant with our daughter the seizure he endured while driving to work. He totaled our car and almost killed the driver in the oncoming lane.  His driver’s license was taken away and eventually he lost his job as an auto mechanic. He needed a license to work.  His neurologist said to me, me who was just one month away from delivering our first child, “I don’t want to tell you that your husband can’t hold your baby but I think you should know that if he had a seizure while holding her, he could kill her.”  It was my sister who came to get me in the middle of the night when I went into labor. My husband, a real macho kind of guy was not allowed to drive a vehicle.

When he died in 1983 he was just 37 years old and his autopsy read, “Drowning as a consequence of seizure.” He was taking a shower, preparing to go to work and had a seizure in the shower. After he died I was left as a single mother to raise our then 2-year old daughter.

Many benefits were afforded me as a surviving widow. The VA accepted 100% responsibility for his untimely death. I was given financial support and could have used my benefits to go to school and for medical care and even to purchase a home. I never accepted any of the benefits except for the financial support. All money received was used for the best private education money could buy for our daughter. I wanted it to be used for something that would live on long after his death. The only stipulation on this support was I could receive financial aid until the day that I died. I decided to accept support until our daughter was of legal age. I remarried and it ended. I was always so thankful that Randy’s service was honored by the very government that he gave his life to serve.

The flag pictured in this blog was given to me on February 25, 1983 after the 21-gun salute and his burial. I visit his gravesite at least once every single year. On Memorial Day I celebrate like everyone else with my share of hotdogs and hamburgers but I also remember my first husband Randall H. Moyer who gave up his life to service in the United States Navy during Vietnam. He served for his country that he loved.

Many of us have friends and family members who serve in our military; it is about service above self. Let’s all remember to remember them this Memorial Day and every day in between.

2 thoughts on “Memorial Day beyond Hotdogs and Burgers …”