Hurting Hearts
By Bernadette A. Moyer

Our hearts are broken after witnessing mass murders in Las Vegas, Nevada. Who does this? What kind of a person kills 58 people and wounds over 500 more and why? We want to know why? While we still demand an answer to what kind of “why” response will it ever be good enough. It won’t!

What causes such hatred and anger in a human being that they would go on a killing mission? Prepare for it, plan on it and then carry it out? Thank God most of us will never understand that mindset and those horrific actions.

This story this event is so hard to process and I knew it would be even more difficult when the faces and the ages and the professions of those murdered would be published. These are people who should have had years and years of living life ahead of them. People that have families and friends who are left to grieve their loss and all the while trying to understand why one human being would do this to any other human being. People that should never have died so young were killed as though they didn’t matter by someone who didn’t even know their name.

Most of us will never understand this and that is a good thing, to identify with this crazed mass murdered isn’t normal for anyone that values human life.

Today I cried, it was tears of anger and shock and grief and loss. As if these murders and gunshots of hatred in Las Vegas wasn’t enough we lost an icon rock and roll star who also died unexpectedly and too young. In a recent interview Tom Petty talked about his desire to travel less and do less shows so he could be there for his grandchildren. It was as if he knew how much he missed out on with his own children and acknowledged that this time things would be different, he wanted to be there.

What can we take away from death? What should the lessons be and what should we do next? We can’t control what other people do, we can’t control many things in life except for what we do and how we handle what comes next.

Grief and loss are tremendous teachers and if nothing else they are supposed to drive home that all we really have is the here and now. The way that we treat people says so much about us. Kindness counts. Every single day we are afforded opportunities to respond with love or with hate. It is a choice.

Whatever was motivating and disturbing the Vegas killer he chose to respond with hatred. There is a lesson here. Hate and anger and killing never ever look good on anyone, not ever. There is no justifiable reason for the killing of innocent people. And the cowardly way in which he chose to murder from a distance and to their backs and then take his own life.

Everything in this event is difficult to process …

What should we come away with? How about what can any one of us do? There are two parts here for me; first and foremost we must live all of life to the fullest. Our days here are numbered and we should live like the Tim McGraw song, “Live like you are dying” do the things that matter to you, spend the time with the people that you love, live life without regrets so when the end does arrive, you know that you did live fully.

And the second thing is to check your anger and hate, let it go, use if for the fuel to do good. Hate and anger although normal emotions in humans can be controlled and redirected into something positive. Always try to lead with kindness and with love. Sometimes it is difficult to do but always, always worth it. Something good can always come from something so horrific … if we seek it, we will find it!

Keeping Positive During These Negative Times
By Bernadette A. Moyer 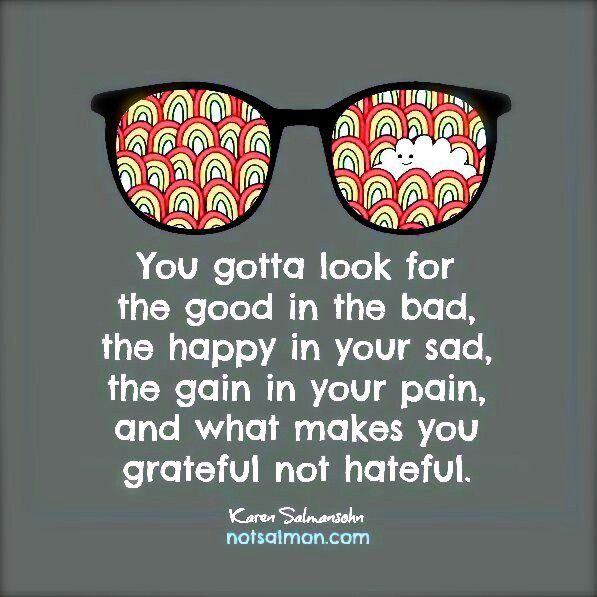 Have you had enough yet? I have! I have stopped watching the news, all of it! I am tired of all the negativity from both sides.

Wow! The amount of disrespect for this President makes me sick inside. Whether you like him or not, we are one Country and he was elected. If this isn’t your choice then go do something productive and positive to change the course.

When I see people hold signage of hatred and signs that read “Resist” and “Not My President” all I can think of is how other countries must view us and then I think about all the childhood lessons we were taught about winning and losing. That being a “sore loser” just wasn’t an option. And more than that I think about little kids with eyes wide open that are seeing a culture of disrespect, disrespect from all sides on all issues and towards all kinds of people.

What am I going to do about it? I don’t even switch channels as not to give the hate media more exposure and more clicks. When friends and associates post things I can’t stomach I quickly scan by and sometimes even remove them and block them. You see to me the sounds and the signs of disrespect, hate, anger, ugly words used by people that I know looks badly on them and not at all on their intended targets. Sadly it makes me think less of them.

People that spew anger, hatred, ugly comments and sentiments only make themselves look bad, period. I don’t want any parts of it.

My husband comes home from work and says, “Did you hear about this or did you see that —?” and I am like no I haven’t I have decided to tune it all out.

So what am I feeding my heart and my soul these days?

I can’t control what anyone else says and does but I can control how I respond to it. I choose to deliberately put my peace and well-being above all the political noise. And that is exactly what it is nothing but noise!

How many wonderful things could you be doing with your time and with your life rather than spewing ugly words and derogatory statements when the truth is you don’t even have all the insider knowledge and facts? The information that you are currently receiving is coming to you by a bias media that has their own agenda. They don’t think we are smart enough to hear all the facts and then make our own decisions without them telling us how to think. No thanks!

If nothing else adults should stop and think if their behaviors are ones that little kids should ever witness? If the answer is “no” that might be a pretty good indication that no good comes from what you are doing and from any form of hate and anger.

Find a positive outlet for your upset, anger and disappointments and try to do something good and worthwhile. Please!

All books by Bernadette A. Moyer on Amazon and Barnes & Noble

You Won But Did You Really
By Bernadette A. Moyer

When you have to kill and to destroy to make your point, have you won? Really won? I have been relatively quiet since the recent mass murders in San Bernardino California; however I have read much and processed much about this subject since it happened.

What argument or disagreement or different way of thinking and living merits mass murder? As a woman and as a mother I think the hardest part for me to process is how any young mother could willingly destroy lives and risk their own life and in doing so leave their six-month old baby behind?

Seems so very selfish to have a child and then take actions that will virtually ensure they will have lost their father and their mother due to their choice of terrorism. To kill innocent people just because they don’t think and believe like you do, over an ideology over a belief in a different God?

Then I think about people that don’t take a life but kill other relationships and other people so that they can get their way, selfishly at the expense of other people. People that lie and people that manipulate and people that willingly play the victim because their need to win and to be right is much more important to them than the well-being of others and for peace and love.

When the mission is purely to destroy, there are no winners. Who won in California? The people who killed innocent people are dead and their child is left without parents. That same anger and hatred that this young female terrorist used to destroy lives, that same amount of energy and that same amount of passion could just as easily been used to better her community and her family and her baby’s life.

A choice was made to destroy …

A choice was made to kill innocent people …

People’s lives are destroyed every day by the actions of other people, it happens in families; it happens on the job, it happens in a community. When the individual need to be right, when a group of people believe that their faith and way of thinking is superior to all others, who really is the winner here?

Whatever decisions we face in life, I would be willing to bet if it starts with hatred and with anger and with a willful desire to hurt others, it can’t possibly be good for anyone nor can it render a winner.

“Anger is a curved blade. And the harm we do, we do to ourselves.” Mitch Albom from The Five People You Meet in Heaven

The terrorist actions they don’t make me want to stop going out or to go to public places but it does make me look closely at other people and their behaviors. It makes me less willing to openly embrace people I don’t know and I find myself saying to myself, “there are a lot of crazy, sick and hate-filled people in this world.”

A sad statement I know but then again there were no winners when terrorist attack and it doesn’t matter to me who the terrorist is and where they come from as much as the fact that it comes from another human being, and the harsh reality of how horribly some people, another human being is willing to go to treat other people so hatefully and with such callousness and cruelty …

New Books! Along The Way and Another Way on Amazon and Barnes and Noble